Why Pictionary Air should be on that must-have list of games! 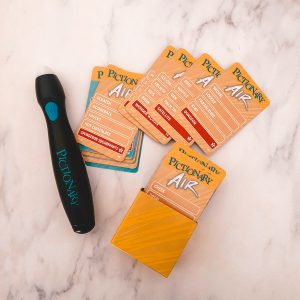 The game, Pictionary was created in 1985 (can you believe it?) so the game is even older than me.

While I let that sink in…

The game was created to liven up social parties. It is one of those games that you play with friends and family over the holidays or when you are just getting together to unwind and drink wine. I may or may not be talking about myself here. 😉 Over the years, the game has been upgraded and tweaked to make it even more enjoyable!

Pictionary Air, which was launched in 2019, adds another layer of fun to the original game with the excitement of drawing in the air.

To be honest, I was extremely excited to play this game since it has been on our wish list of games to buy for a few months now. My family has a collection of games… Okay, we take gaming seriously. I mean, our tradition for boxing day, is playing games with the entire family and of course, the winning team gets some cool prizes.

Did it meet my expectations?

Definitely! It is a fun game to play even with the youngest members of the family however it did shatter my dreams a little. It finally hit me that I could never be an artist…

If my 5-year-old could not figure out what I drew than I doubt anyone else would. On a serious note, there are a few things you need to know about this game….

1. You need to have a smart TV to connect the app if you want to see your drawing on a bigger screen which I highly recommend.

2. I found the app a little glitchy which can be frustrating. I know that they do regular updates, so I am hoping I do not have this problem for too long.

3. Sometimes your drawing turns out nothing like what you thought you drew – The functionality of the pen and the lines you draw on the screen are affected by the lighting around you so keep that in mind when playing.

4. As mentioned in number 3, the mounting of your device also plays a role in this. If you have a tablet, use it instead to cast.

5. There are only 112 clue cards so if you are playing with a large group of people, you might end up going through them all quickly. I think this might be an excuse to have more wine, so you forget the earlier clues. 😉

Each player takes a turn to draw a clue in the air while your teammates must guess the image that appears on the screen. The team with the most points wins! Sounds easy but may be trickier than you think. This game may cause a mixed bag of emotions for kids younger than 8-years-old. It may also be the reason you laugh uncontrollably at your teammates and their artwork.

MomSays highly recommends the game for the festive season but only if you have a techie at home that knows how to cast and report an error on the app.

Pictionary Air includes AA Alkaline battery which I think is important for you to know as a parent. 😊 Mattel recently announced 13 creative new ways to play UNO, making games more fun and extending the gameplay! Uno (Spanish for “One”) is a specially printed card game that has been around for a long time, with 2011 marking its 40th anniversary. Since its invention, Uno has sold more than 150 million copies and is […] We are excited to announce MomSays Rewards i…

One thought on “Why Pictionary Air should be on that must-have list of games!”